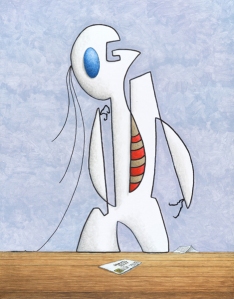 Stopped in Waurika, Oklahoma, and found a wonderful rustic looking Bed & Breakfast. Later in the day as I returned to the inn after a walk I found several of the guests conversing in the Dining area. Much of the conversation centered around trying to find a fourth for Pinochle, and not just any Pinochle but Double Deck Partners. Without hesitation I jumped at the opportunity.

Chad, Mitchell, and Trey, as my partner sat down in the dining area to begin playing and it was during our game that John, a rather quiet but slightly emotional owner of the B & B opened a letter from his wife. She had, several days ago, gone to visit and help out a sick friend of theirs. John proceeded to read about his wife’s stay and how during the caring for their friend “she gave thought to what it would be like to fall in love with him and continue to stay even after he had regained his health”. That, upon her decision to stay, she would ask you to “box up and mail all my belongings” and would you “send the checkbook as I would need money to buy fancy new shoes and clothes” and also “have someone bring over the cat too”. The page concluded with “These were some of numerous thoughts that went through my head”.

Reading this created several outbursts of, “oh me’s” “What did I do wrong” and “How could she’s”. I took this picture after John had dropped the letter and he started into the “should I end my life” phase of moaning. Janet, a frequent guest who was sitting nearby, was concerned enough to pick up the dropped letter and looking closely saw that two pages were pressed so close together you thought it was just one sheet. Janet took it upon herself to separate the pages, calm John down, and insist that he read the second page his wife had written that started out with the sentence “but that didn’t happen, couldn’t and wouldn’t happen” and went on about how she found a “reaffirmation of love for John….”.

After the major drama of the letter had subsided and we went back to our game, John regained his composure, relaxed with a glass (or three) of wine, retired to the kitchen to bake a batch of chocolate chips cookies to share, and took requests for drinks. I asked if per chance he had a bottle of a local brewed root beer. He did.

Double Deck Pinochle, exceptional Pinochle players, home baked Chocolate Chip Cookies, local brand of bottled Root Beer. I would have to say that this was one of those-’It doesn’t get any better than this” moments.

Likes, Shares, and Comments are welcome.