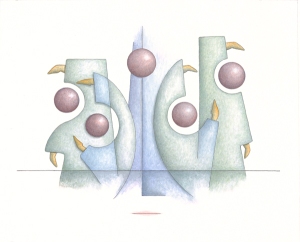 My stay in Weidup, Arizona has been rain, Rain, and more RAIN. A slow steady rain with very few pauses. Two events I was interested in attending were canceled. The first, a two day outdoor Arts and Crafts fair on the outskirts of town, canceled due to rain. The other event, a Bluegrass concert some 40 miles North, in Kingman, also canceled due to the lead singer’s unexpected elopement with the lead guitar player.

With a third day of rain, reading, working in the sketch book and aware of a “Twitting the Thumbs” mood creeping in, I made my way down to Ned’s Diner for a late lunch.

Missing the bulk of the lunch crowd, the place was relativity empty except for two behind the counter teenagers, Phil and Rita, as their names tags implied. As they took their lunch brake, once things were slowed down, two of their friends, Nancy and Larry stopped in to join them.

Phil and Rita already caught my attention with their behind-the-counter levity but together the four turned it up a notch. Silly, laughing, goofy, and at times clowning around with their food.

During their display of comedic actions, one of their trays worked it’s way off the table and created quite a mess. I was near enough that I helped them clean it up. A conversation developed and despite a substantial age difference, the mood, talk, and the laughs between us made it relativity easy to become friends.

Rita asked if I would be interested in seeing, this evening, a High School dance recital they were involved in. The “One Night Only” recital was sold out but Nancy’s older sister took off unexpectedly to audition for an opening of lead singer in a now very shorthanded Bluegrass band, so an extra ticket was available.

I couldn’t  imagine what was in store for me based on the type of characters they had already projected in the diner.

During the recital, I was extremely impressed by the set design and chorography, as well as the level of expertise and commitment by all the students involved.

Phil made a singular contribution to a jazz piece and teamed up with Nancy for a 50’s bebop number. Rita and Larry did a beautiful ballroom waltz. Together, these four, as noted in the program conceived, choreographed and presented the finale, a tribute to an early 1900’s composer, Henry Kimball Hadley. They selected parts of three Symphonies he wrote, to form a Music/Dance medley that would involve all four of them both in the title as well as dance.

I took this picture as they performed their interpretation of the first classical piece entitled “Youth and Life”, which was followed by “The Four Seasons” and “North, East, South, West”.

After the recital and getting their well deserved hugs and congratulations they gradually transformed back to the four goof-ball teenagers I had encountered at the diner, the laughs and silliness back in top form. They even managed to make their way over as I was leaving and we shared several words and laughs before parting company.

In a few short hours I had become very good friends with a very special foursome, funny what a rainy day can bring.