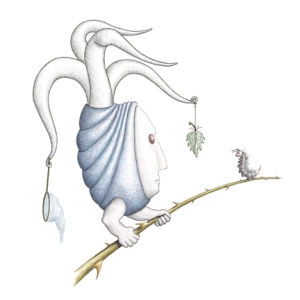 Aware of the direction of my Journey, the Ranger at Cape Disappointment recommended a Nature Observation site deep in the Idaho Panhandle National Forest that specialized in finding rare Arthropods.

Making my way deep into the forest on unimproved roads with only the ranger’s hand drawn map, I arrived at a very modern but environmentally designed series of buildings tucked away in a small stream fed valley. While not an advertised tourist spot, the resident park personnel welcomed the occasional visitor that went out of their way to find this place.

After spending a very full day of extremely informative discussions, walks, and viewing collections of unique and rare species, they expressed a concern about the difficulty navigating the forest roads back to town in the darkness and offered a spare bed to spend the night.

Before turning in, we sat around an evening campfire and they proceeded to tell me a story of having received several hand delivered letters over the past two weeks. The letters, from an unknown source, outlined the chance to receive for observation via a trade, an extremely rare caterpillar that the park personnel have been trying to capture since the first sighting several months ago.

The trade, “Bob” (the name they applied to the unknown letter writer) proposed, consisted of one case of hand lotion, six pairs of leather work gloves for him and a few friends, and assurances that the caterpillar had to be released once he morphed into a butterfly. Release was critical to the pollination of an equally rare flower that served as an important food source to Bob and his friends. The lotion and gloves, the letters stated, were essential to help ease up on blisters, winter’s split skin and the ‘holding rough hands’ complains from their wives.

With assurances of terms confirmed, the last letter they received two days ago, outlined coordinates to a location to construct a blind, to both observe the capture and complete the trade.

We awoke the next morning to find a letter had arrived, informing them to be at the newly constructed blind within two hours, along with the lotion and gloves. Since I was present, they allowed me to tag along.

Within an hour of occupying the blind we became aware of the caterpillar, dropping down to the end of a thorn covered branch by a silken thread. At that moment out of the shadows of the underbrush emerged a manlike creature with a shell body and no legs. Slowly making his way up the same branch using his hands, we also noticed four tentacles unfurl from the top of the shell, one holding a leaf that perked up the caterpillars attention. Another tentacle dropping down behind his back, held a net.

I took this picture a split second before a very hungry caterpillar made a move for the leaf and with one quick motion snatched up in the net. In a second motion, Bob jumped to the ground and handed the net and caterpillar to the rangers and with no words exchanged, accepted the lotion and gloves and quickly disappeared back into the forest.

Upon my preparing to leave this morning, after spending a second night, I was informed another letter from Bob had arrived. This one, they read, contained thanks for the lotion and gloves for the cold winter ahead and, to everyone’s delight, the hint of one day sharing one of those campfires they have watched from a distance.