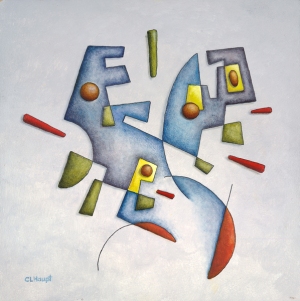 Continuing with my second stop of four in Maine, I checked into the Hearthside Bed & Breakfast in the town of Bar Harbor on Mt. Desert Island. Besides working on a couple of small drawings, I plan on doing some biking at the adjoining Acadia National Park.

Within the park’s borders lies “The Carriage Roads”, a network of 51 miles of crushed stone roads divided into 12 interconnecting “Loops”. Catering to walking, biking, horseback riding, and horse drawn carriages, no motor vehicles are allowed on the roads.

As I was unloading my bike, two separate groups of bicyclists arrived and parked on each side of the street. One group, also checking into Hearthside Inn, began unloading their bikes, 11 restored late 19th century Penny Farthings. All the bikes sported 50 to 56 inch diameter front wheels and modified with brakes on the smaller rear wheels. Eugene, the unofficial leader, related, with most of the members, by profession, connected to law enforcement, we call ourselves “The Copper Pennies”.

The second small caravan of similar vehicles arrived at the B&B Inn across the street with numerous “regular” gear-driven Ten-speed bikes perched on racks. Appropriately, by decals on  bumpers and windshields, they proclaimed themselves “The Gearheads”

I milled the perimeter as both groups converged, checking each others bikes. As compliments mixed with technical talk, biking stories, and touring the Carriage Roads, the friendly banter initiated a lighthearted wager in the form of a race.

Taking into account the pro’s and con’s of both styles of bikes, a handicap was agreed to. Looking over the map, the Gearheads, led by James, agreed to bike Loop 12 (11.1 Miles) and the connecting Loop 4 (8.6 Miles) would be biked by Eugene and the Copper Pennies. The start/finish would be the Deer Brook stone bridge, located on the connecting section, and in case the finish was close they would enlist a neutral party to declare the winner.

With that, both groups turned in my direction. I agreed.

The following day at the Carriage Roads, on a brisk sun-filled morning, both groups gathered, with the “Gears” facing North and the “Coppers” facing South at the North end of the Bridge. With my shout, they began.

An hour an a half later, it was the whoops and laughter of Eugene and James, out in front, approaching from opposite directions, that brought me to attention and I readied the camera to record the finish. Realizing it would indeed be a close finish, they shouted encouragement and urgings to those close behind, and picking up speed, bore down for the finish at the South end of the bridge.

Now, maybe, if the rabbit that scampered up onto the road’s edge across from me, had waited 30 seconds before deciding this side of the road was the “greener pasture”, harmony and a good natured resolution among bikers may have ruled the day.

My warning was, for the most part, useless, as were their brakes at the suddenness of the potential circumstances. Both Eugene and James, seeing the rabbit dart directly in front of their merging paths, veered, mistakenly into each other, with two other bikers close behind.

At five feet above the ground, an abrupt stop, launching the rider forward head first, called a “Header” is the most dangerous aspect of riding a Penny Farthing.

Taking this picture at impact, Eugene, instinctively, took his feet off the pedals, leaned back, and brought his legs and feet up over the handle bars, so he was pitched off the bike feet-first rather than head-first. An old written solution he had never had the occasion to use until today.

When the dust cleared, without a doubt, the most amazing thing was the lack of serious injury and of damage to the bikes other than Eugene’s Penny Farthing’s front wheel separating from the frame.

A safe unaware rabbit, several band-aids, needed replacement parts back at the Parking lot, an assurance that everyone received a photo of the crash, and an agreed upon “Tie” put everyone back in fine spirits.