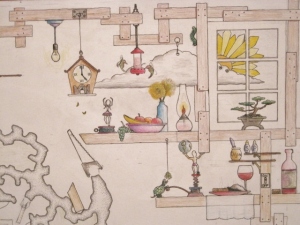 “The House That Jack Built”

Herein is the Third corner of the Pen & Ink worksheet with suggestions from viewers to “The House That Jack Built” project. This is a camera shot rather than a digital scan so coloring is different from the previous “3rd corner” post.

Thanks to all that have participated so far.

As I mentioned in the first post (June 16) of this project, not all suggestions can be incorporated into the image. However some suggestions I do not include may still find their way into another corner of the house.

An example of this:

A Newspaper was suggested for the Third Corner and I have added this to the First Corner Porch area.

Had two suggestions for wall clocks, one a cat clock with the pendulum tail and one a cuckoo clock, so I used the cuckoo clock design but put a cat in place of the bird.

As I continue to lay out the painting, some shifting, additions, and alterations of suggestions can still take place up to the final strokes of the brush.

Next week I will post the Fourth Corner with areas to be considered and look forward to additional suggestions.

The continuing posting schedule for the project is, as laid out:

Monday, August 25; Post the Fourth and final Corner for suggestions of that area

Continue the sequence, and end the project with the posting of the completed painting.

Postings of “The House That Jack Built” are every Monday Evening.

Postings are made to:

3 thoughts on ““The House That Jack Built”-Week Ten”