Continuing to post updates and general information regarding the current ‘The Journey to Ukazoo’ Kickstarter book project.
The Kickstarter project runs to April 3 with a variety of ’rewards’ offered for your help in increasing the amount of books I can order from the publisher as well as opportunities to have your name in the book.
The artwork accompanying this post is the second of three 5 x 7 prints offered at one reward level.
This artwork is also included in ‘The Journey to Ukazoo’ Book.
My hope is that, at the very least, you are able to take a few minutes to visit this unique ArtStory project and Share it.
Kickstarter Link: http://www.kickstarter.com/projects/clhaupt-ukazoobook/the-journey-to-ukazoo?ref=dsg7mv&token=5bde1fb2

Thanks to supporters of this book: Susan and Sherry.

‘On the Pier’ (in Story 31 of 37)
Copyright: Craig L Haupt
Ukazoo: A Trademark of Ukazoo Bookstore and used with permission. 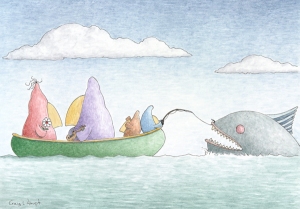 Stopping in South Berwick, for the fourth of my four stops in Maine, I checked into the Academy Street Inn. Eyeing a sign-up Brochure in the parlor I penciled in my name for a three-day, middle of the week, camp-out/canoe excursion at a nearby lake, along with several other guests.

To compact the amount of vehicles used for the trip, I shared a ride with a couple and their two children, Ross and Ava. During the in-route conversation, I was informed that besides enjoying a camping adventure with the kids, they were also revisiting the place they first met 14 years ago. Ross, their son, was especially excited because he wanted to use his newly acquired rod & reel, originally owned by his great-grandfather, now handed down to him from his dad.

At the lake, I set up my tent near their site and we did a buddy thing with meals and chores.

Posted on several trees around the camp sites were the recreational do’s and don’ts. All the usual, lifejackets, no alcohol, etc. but down at the bottom in large bold letters:

Lake is Home to

Do Not keep any in your boat

After, ironically, having cheeseburgers for lunch, I overheard Ross and his sister jokingly plotting to take a leftover cheeseburger on the canoe ride to try and catch “Big Moe”. Once cleanup was completed and the group prepared to take the canoes out, Dad took a well worn ukulele he had used to serenade Mom during their first date. Out on the lake, their canoe leisurely drifting, Dad was now lost in his singing, and Ross, with a surprised Ava peering over his shoulder, hooked up his fishing line with a cheeseburger he had secretly pocketed and cast it into the water.

Glancing over from my canoe, I saw Ross’s fishing line tug.

I quickly grabbed the camera and took this picture as the line pulled taut and up came “Big Moe”.

With Ross, struggling to hang on to the rod, Ava turned around and franticly started yelling to get dad and mom’s attention. The bow of the canoe started to tip up and out of the water as “Big Moe” kept pulling down on the line trying to free himself. Not wanting to lose his prized father-to-son fishing rod, Ross resisted his mom and dad’s pleas to release the rod & reel. As everyone started to slide down in a ‘Titanic’ moment, and the curved rocker at the stern inched below the water’s surface, Ross had no choice, he let the rod go. In that instant, “Big Moe” and the fishing rod disappeared beneath the surface and the canoe, tension released, arched forward and down, slapping the lakes surface with a jolt. Shaken and wet from the spray of water, miraculously, everyone remained in the canoe.

That evening, with the rest of the group turned in for the night, I heard two distinct noises while sitting on the pier watching the stars.

The first noise was Ross wandering out to the pier. Sad about losing his rod & reel, he couldn’t sleep. While we recounted the day’s adventure, the second noise occurred. In the water, a splashing sound. Directly in front of us, with hook, rod, and reel still attached, was “Big Moe”.

Big sorrowful eyes begged us to take the hook out. Having the longer reach, I carefully removed the hook. At the same time, Ross used a nearby pole to bring the rod close enough to the pier for him to retrieve. With that accomplished, “Big Moe” lowered himself slightly into the water and back up again to suggest a thank you. Then he remained, patiently waiting. It was Ross that figured it out.

Quickly running back to the campsite, he quietly got two leftover cheeseburgers from the cooler and returning, did a gentle toss of each to a very appreciative “Big Moe”.

Another thank-you dip and submerging, out of sight, “Big Moe” swam away.