With a New Year and a new upgraded computer, it was time to make adjustments to the Video Episodes.

This episode features the first two paintings of the 48 primary paintings included in the in-progress design of my second ArtStroy book. The goal is to play catch-up as to align the Video Episodes postings of the 48 paintings to match my social media platform (FaceBook, Blog, etc.) postings. Also included in this Episode is a ’fictitious Letter’. Since I have posted 12 episodes I have received few comments and no questions about the designing an Artbook content. Because my previous ArtStory book and recent online art projects have included various levels of audience participation I would like the videos to have that element of involvement also. With no audience questions to date, I decided to create my own questions in the form of a ’fictitious Letter’. The introduction of the ‘fictitious Letter’ aspect will also give me a chance to integrate my artistic history/autobiography into the episodes.

This Episodes guests musicians are:

The ArtStory book will feature 48 full color images, 77 supporting images, and 24 short story/vignettes within a 9.5 x 9.5, 100 plus page self-published book.

One of 10 artworks to be displayed in the Katsea Gallery in Towson, Maryland during their Nov/Dec exhibition.
“Always Look Both Ways”, oil on board, 20 x 16 inch
Copyright: Craig L Haupt

The 37 stories in “The Journey to Ukazoo” book consisted of the story to the left page and paired image on the right page. Below each page was a 2.5 x 8 inch border art.

The previous two posts highlighted the border art for Story 2.

This post highlights the image used for Story (Slide) 2

“The Journey to Ukazoo” book is still available at http://www.clhaupt.com. U.S. and Canada mailings only.

Today is the one year anniversary of completing a successful Kickstarter campaign to self-publish “The Journey to Ukazoo” ArtStory book. To all those who supported, Shared, donated, helped, and became a part of the book, I thank you, thank you, thank you all!!

“First Friday Art Walk” event at Highlandtown Gallery, Baltimore, MD, Feb 7, 5 to 9pm. I will be displaying eight pieces of artwork. Please take the time to stop in to see my art along with a host of other wonderful works by other artists.
“The Journey to Ukazoo” book will also be available.
Shown is one of the my eight: “Back to Back”, oil on canvas
Copyright: Craig L Haupt 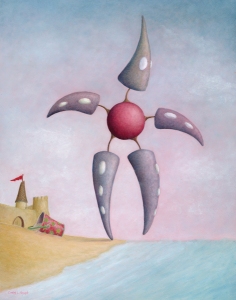 “The Journey to Ukazoo” book signing Sat. Jan. 18, 1 to 3pm at Highlandtown Gallery, Balto. MD.
Please stop in, at the very least, to say hi. Shown is the book’s second image of the Journey. This unique and whimsical ArtStory book contains over 150 full color images.

Artwork, written, designed and published by yours truly.
“At the Beach’ Out” copyright Craig L Haupt

Sold! A wonderful evening at the Highlandtown Gallery First Friday exhibit. For those in the Baltimore, MD area, I hope that anyone unable to make the opening will make the time to join me for a book signing Saturday Jan 18 and if you haven’t done so already, purchase a copy of this unique ArtStory book, “The Journey to Ukazoo” 1 to 3 p.m. “The Journey to Ukazoo” 1 to 3 p.m. Hosted by gallery owner Felicia Zannino-Baker.

Highlights of the book include 37 short stories matched up to 37 art images plus 74 border artwork strips and other artworks, a total of 153 art images in this 9.5 x 12.5 inch 142 page book.

Video highlighting the making of the book can be found on my website http://www.clhaupt.com under the ‘TJTU book’ tab. 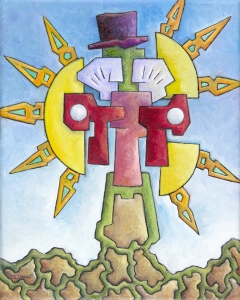 Second of six paintings to be displayed at the “100 Artist Show”, First Friday, Jan. 3, 5 to 9 at Highlandtown Gallery. Would love to see, meet, and say hi to everyone during the opening reception, My “The Journey to Ukazoo” book will be available for sale.
“Fractured Sun” Oil on canvas
Copyright: Craig L Haupt

Would love to see and say hi to everyone during the opening reception of the 100 Artist Show for 2020, First Friday, Jan. 3, 5 to 9 at Highlandtown Gallery. I will have on display several works plus “The Journey to Ukazoo” book will be available for sale. If you are in the Baltimore, Maryland area, please stop in.
“Pardon Me” Oil on Board
Copyright: Craig L Haupt