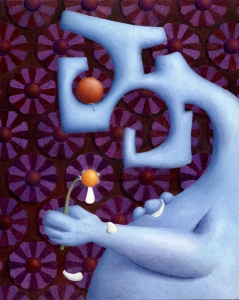 Included in The Journey to Ukazoo’ book are the 9 oil paintings shown during the Ukazoo Solo Exhibit. This is one. Two weeks left to invest in a book, prints, or, as your opportunity for immortality, have your name somewhere in the story text or border artwork. Please visit my Kickstarter page and support the publication of this unique ArtStory project.

The Kickstarter project runs to April 3.
My hope is that if unable to support this ArtStory book, at the very least, you are able to take a few minutes to visit this unique ArtStory project and Share it.
Kickstarter Link: Craig L Haupt
My thanks to supporters of this book: Carole, Susan V,  Joan, and Cheryl

Image: ‘She Loves Me Not’
Copyright: Craig L Haupt
Ukazoo: A Trademark of Ukazoo Bookstore and used with permission. 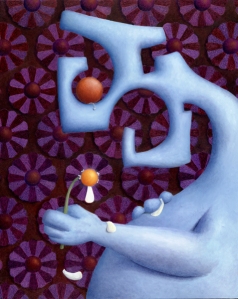 “She Loves Me Not”

After two months of holiday season and the distractions of reading several books I refocused on painting again, knowing if I was to seriously consider a next art exhibit I wanted to be able to complete an estimated number of paintings.

In late January, 2013, I started a painting that I considered to be my cornerstone of the next exhibit and a month later this painting was shelved by technical problems that arose with the undercoating. Frustrated  and not sure about restarting it, I turned my attention to a new painting- “She Loves Me Not”.

With April showers (an understatement) behind us and May flowers a-blooming, there is still the reminder of the upcoming new project to be posted Monday June 16th. Added to the flashing lights, musical fanfare, confetti, fireworks, and the jugglers with flaming batons of last weeks:

Are clowns weaving back and forth on six foot high unicycles.

As always, knowing my difficulty of making such a loud announcement, I say softy, please keep following my journey, more neat art stuff is on the way.

Postings of “Ukazoo Journey” are every Monday Evening.

See “Slide One” for a brief synopsis. 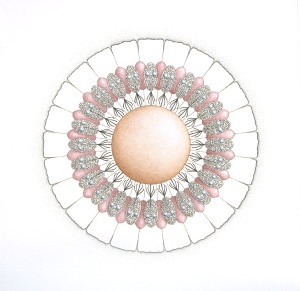 Checked into a Pueblo style Bed & Breakfast in Albuquerque, New Mexico, and spent the following day visiting several Art Galleries. After a late afternoon dinner I returned to the Inn, fixed a cup of tea, snatched up the few remaining cookies set out earlier in the day for guests, and moseyed out to the courtyard to relax and read a book.

Before settling in, I caught sight of the many varieties of cactus and flowering plants scattered throughout the garden area.

The Inn’s host, Archimedes’, or Archie as everyone called him, had also wandered out and seeing my interest, directed me towards a very distinct flower. Said he had no idea where it came from or what type of flower it was, and never had any idea when it might bloom.

Just happened to be one of those “in the right place at the right time” moments.

Archie went back into the house to start prepping for the next day’s breakfast and I went to get the camera.

As I took this picture of the flower, I couldn’t help but overhear several voices at the far end of the courtyard. Making my way a little closer I became privy to a meeting of several roadrunners. The conversation centered on coordinating a family reunion picnic while they perused several area maps and global satellite imaging printouts to ascertain choice locations that might be relativity safe from a rather persistent coyote. They also were in the process of setting up a computer generated GPS tracking system. Intrigued, I couldn’t help but ask how the need for a tracking system fit into the scheme of things.

With hushed voices and over the wing looks they informed me that they had hacked into the coyote’s email account and found he was due to receive a shipment of PED’s from someplace in Florida, which he used to increase his stamina for extended chases.

They had also, by selling lemonade disguised as Boy Scouts, earned enough money to make a rather large “donation” to the local UPS driver, and just this morning intercepted the package of PED capsules. Quickly inserting a GPS microchip into one of the capsules, which when swallowed would trigger a 24 hour activation period, they would be able to monitor this pesky coyote’s location and movements.

Granted the picnic was contingent on when the Coyote took the tampered capsule, hence,  daily monitoring of it’s activation on the GPS tracking system was imperative and everything, picnic wise, was prepped and made ready for departure at a moments notice.

That was Wednesday, and on Sunday morning, there was a major commotion going on outside the Inn. I rushed out to witness the beginnings of a major roadrunner convoy. Carts, wagons, bikes,  scooters, on foot, everything packed and set in motion as they had sent word that Operation REUNION was activated, the coyote was now being tracked, and a fix on the safest place to picnic was verified.

Later that evening while having a glass of wine and finishing the book, I became aware of one tired but extremely happy group of roadrunners returning from a marvelous day of fun, sun, food, and most importantly coyote free.